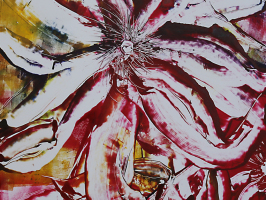 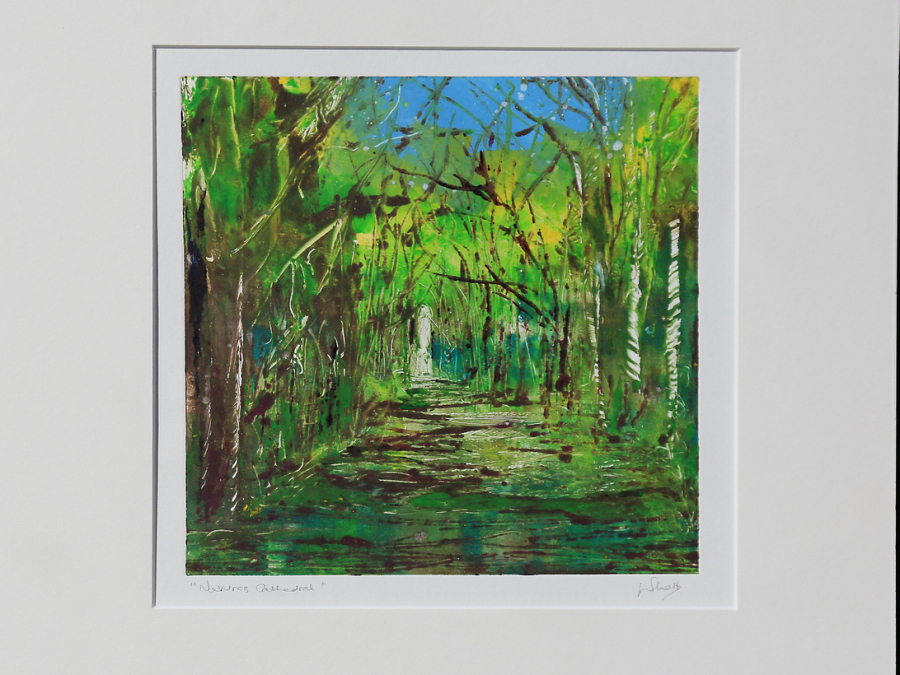 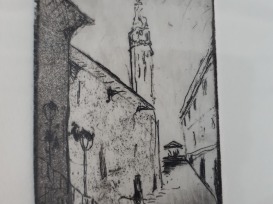 We have asked someone who is not a trained artist to prepare a Glossary of terms used in the art world to help answer some of your queries:-

Printmaking is an art form in its own right with a multitude of differing techniques.

This is not a professional description but information gathered and presented by a lay person for those who may not be familiar with the terminology.

Originally a wood or metal block was used. Either engraved in intaglio (raised) or cut in relief(incised), ink was put on the block which was then pressed onto paper or another surface leaving an image in reverse to that on the block.

The following techniques are among those used:

Lithography – the inked and non-inked surfaces are no different in level unlike other techniques. A design is put on polished or grainy stone with a greasy crayon or ink. Acid and gum Arabic fix the design before water is used. Oil based ink is then rolled onto the stone, repelled by the water but attaches to the image drawn in crayon or ink. Multiple stones and or multiple printings can produce multi coloured lithographs.

Aquatint – an acid biting technique using tones rather than lines and a granular or pebbly effect can be produced.

Carborundum – a very hard material used as an abrasive but in powdered form is a method of engraving producing dotted effects.

Chine Colle – Rice paper or thin tissue are glued or mounted on a print where the ink of the plate glues the paper to the substrate during the pressing process.

Cliché-verre – A negative design is created by drawing or scribing through an ink covered glass plate. Photo-sensitive paper exposed to the light produces an image without ink touching the paper.

Collotype – a mix of gelatine and potassium chromate is put on a metal or glass plate which hardens in response to light exposure. Ink and water can then be used to produce a form of lithography which was successful in producing prints of watercolours.

Drypoint – lines are scratched into a metal plate in the same way as drawing with a pencil, the lines vary and produce a burr of metal which along with the incised lines will take some ink.

Engraving – a more formal method of cutting into a polished metal plate with a graver. The line varies in strength according to the depth of the incision. Traditionally the plate is turned to achieve a curve rather than altering the graver.

Etching – a metal plate is covered with a ground (uniformly black) which is acid resistant. An image is cut into the ground and then acid is used to attack the exposed areas of metal. This process can and often is, repeated several times to achieve the desired effect.

Intaglio – An image is incised or cut into a metal plate but the ink is forced into the lines rather than sitting on top of the plate. The paper can be dampened to squeeze it into the lines which can then result in the printing being raised from the paper.

Linocut – a variation on the woodcut approach as linoleum is more supple and has different characteristics to woodcuts. Several blocks are used to produce coloured prints.

Mezzotint – an intaglio technique which reverses the norm so that the material appears dark and is lightened only by further manipulation and smoothing or scraping the ink away.

Monotype – paint or ink are used to create a design on any smooth surface and, while the medium is still wet, paper is laid on top and pressed. Usually this produces only one clear print hence the name. If enough ink is left on the surface or plate and a second print is made it is called a shadow print. This creates a very different image to the first one.

Photogravure – uses a copper plate (or a cylinder) rather than photo-sensitive paper, exposure to light and scattering resins or grains over the surface which can be done mechanically allowing very fast printing speeds suitable for commercial and industrial needs.

Relief printing – relief techniques are where the surface is inked but the cut or incised areas do not usually take ink as they are recessed. However an embossed effect can be created when during a print run paper is pushed into a recessed area. They do print when the inking is done in the same manner as an etching plate.  Often relief printing is done by Linocut or Woodcut.

Screenprinting – screenprinting or silkscreen is where stencils are applied to a screen ( silk, or a metallic or synthetic material) so that when ink is applied it is blocked in some places whilst passing through in others to print a design on the paper below. The screen is carefully prepared and is mobile so that it can be moved as required.

Stencil – an essential part of screenprinting as they are attached to the screen to allow the ink through in the right places. There are many variations including positive, photo and masking. All aimed at delivering the ink(s) to the right place. They can also be used for colouring prints by hand singly or in series where they are superimposed or juxtaposed.

Woodcut – draw a design on a piece of wood and cut or pare away the area not to print.

Woodcut chiaroscuro – the design is split between different blocks with each using a different colour thus requiring multiple pressing or printings to achieve a result displaying all the colours used.

Wood engraving – polished blocks of wood are incised or cut but the lines are not to print. The uncut surface will take the ink and print the design.

She may also correct any errors above